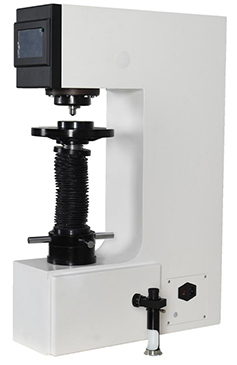 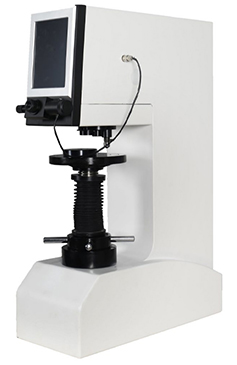 The new standard only allows the use of cemented carbide ball indenters. The Brinell hardness conforms to HBW and should not be confused with the previous symbol HB and the symbol HBS used when steel ball heads are used.

The advantage of the Brinell hardness test is that its hardness is representative. Because it usually uses a 10mm diameter ball indenter and a 3000Kg test force, its indentation area is larger, which can reflect the average value of the comprehensive influence of the various components of the metal in a larger range , And not affected by individual composition phases and small unevenness, so it is particularly suitable for the determination of gray cast iron, bearing alloys and metal materials with coarse grains. Its test data is stable, reproducible, and its accuracy is higher than Rockwell and lower than Vickers. In addition, there is a good correspondence between the Brinell hardness value and the tensile strength value.
The characteristic of the Brinell hardness test is that the indentation is large, and the finished product inspection is difficult. The test process is more complicated than the Rockwell hardness test. The measurement operation and indentation measurement are more time-consuming, and the edges of the indentation are protruding, concave or smooth. Makes the measurement of the indentation diameter produce a large error, so the operator is required to have proficient testing technology and rich experience, and generally requires the operation of a specialized experimenter.

In the formula: F————The test force applied to the sample through the ball indenter, the unit is N.

In order to reflect the hardness value of the style as large as possible, choose a large-diameter indenter for testing.
When the thickness of the sample allows, a ball indenter with a diameter of 10 mm should be preferred.
The selection of test force must ensure that the indentation diameter d is between 0.24D and 0.6D.
The test force-indenter diameter square ratio (0.102F/D2 ratio) should be selected according to the material and hardness value:

7. Brinell hardness test requirements:
The sample should be placed on a rigid support. The back of the pattern and the support should be cleaned of any external dirt (cultivation skin, oil, dust, etc.). The pattern is firmly placed on the support to ensure no displacement during the experiment. The time from the start of the application of the force to the application of the entire test force shall be between 2s and 8s. The test force holding time is 10s~15s. For materials that require a longer test force retention time, the test force retention time error is ±2s. During the entire test period, the hardness tester should not be subjected to shocks and vibrations that affect the test results. The distance between the center of any indentation and the edge of the pattern is at least 2.5 times the average diameter of the indentation. The distance between the centers of two adjacent indentations is at least 3 times the average diameter of the indentations. The indentation diameter should be measured in two mutually perpendicular directions. Use the average of two readings to calculate the Brinell hardness.
Note: For automatic measuring devices, the following methods can be used for calculation:
——The average value of multiple measurements at equal intervals;
——The numerical value of the projected area of ​​the material surface indentation.

10. Brinell hardness measurement range
The upper limit of the Brinell hardness test range specified by the standard is 650HBW.
For the experiment of special materials or products, it should be stipulated in special standards.

11. Brinell hardness test report:
The test report includes the following:
The number of this part of GB/T 231; the detailed information about the style; if the test temperature is not 10℃~35℃, the test temperature should be indicated: the result of the test; the operation not within the provisions of this part of GB/T 231; affect the test result Various details.